THE TWO PEOPLE DROWNED WHILE CROSSING A TEMPORARY BRIDGE BUILT ON A DRAIN IN SOLANG, MANALI.

The rescue operation began in Solang Nala in Himachal Pradesh’s Kullu on Tuesday after two people went missing in the flash floods caused due to heavy rain on Monday.

Teams of the National Disaster Response Force (NDRF) and the police and fire brigade are deployed at the spot. 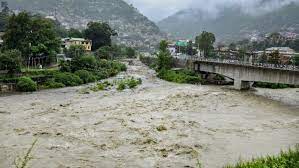