In Prague, Jaishankar meets Indians and discusses the state of bilateral relations 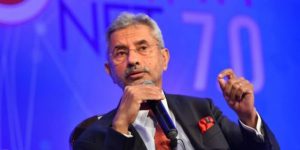 External Affairs Minister S Jaishankar met with members of the Indian community here on Sunday and briefed them on recent events in India as well as the health of the bilateral relationship.

Jaishankar is in town on the final phase of a two-nation journey to Slovakia and the Czech Republic, where he hopes to bolster ties between the two Central European nations. Jaishankar sent out a tweet,  “Delighted to meet the Indian community in Prague. Good to see many of them doing so well. The expansion of the community has also been encouraging. Shared with their developments at home and the state of our bilateral relationship. Count on their continuing support,”

The minister of foreign affairs arrived in Prague on Saturday from Bratislava, Slovakia’s capital. Jaishanakar met with the Czech Finance Minister on Sunday. From July 1, the Czech Republic will assume the EU Presidency.

In the Czech Republic, over 5000 Indian nationals, predominantly IT professionals, business people, and students live. According to official numbers, there are various informal groups of Indians/people of Indian heritage that organize community activities in collaboration with the Embassy.

His visit comes as Europe grapples with the fallout from Russia’s invasion of Ukraine, as well as European countries’ efforts to persuade India to take a harder stance against Moscow for its activities. Jaishankar’s meetings with his Czech counterpart would give a chance for a complete assessment of our bilateral relationship,” the Ministry of External Affairs said in a statement before his departure.