Biden tells Quad Summit: Russia-Ukraine conflict is a global issue, not a European one 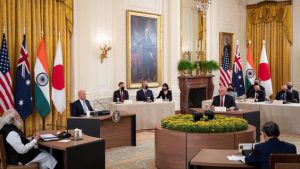 US President Joe Biden stated on Tuesday that the world is at a “transformative moment” that the Russia-Ukraine crisis is not merely a European but a global issue, and that Indo-Pacific states would-be allies and lead a global response to the Ukraine conflict.

In his opening remarks at the Quad Leaders Summit conference in Tokyo, Biden said the world is guiding the ship through a difficult time, referring to the three-month conflict between Russia and Ukraine. “Russia’s attack on Ukraine has resulted in a humanitarian disaster, with innocent citizens massacred in the streets.”

Biden began his speech by emphasizing the difference between “democracy and autocracy,” adding that the US, Australia, Japan, and India’s relationship is critical to accomplishing crucial goals in healthcare, technology, and supply chain resilience.

He stated that the Quad nations have already accomplished a lot. “COVID-19 response, health, and security cooperation. Collaboration on 5G and other technological supply chains and technology standardization, as well as the introduction of our Quad fellowship program.”

“The Quad has a lot of work ahead of us. We have a lot of work to keep this region peaceful and stable, tacking this pandemic and next and addressing the climate crisis,” Biden remarked in his opening remarks at the Quad Leaders’ meeting.

“US will be a strong, steady, and enduring partner in Indo-Pacific. We are Indo-Pacific powers. As long as Russia continues the war, we are going to be partners and lead a global response. We stay together for the shared values and vision we have,” he stated.

Prime Minister Narendra Modi, who spoke before Biden, said that the member countries’ mutual trust and resolve, which include the United States, Australia, and Japan, is giving democratic powers fresh vitality and passion. 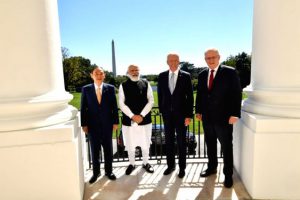 For the fourth time, and for the second time in person, the leaders of Australia, India, Japan, and the United States are meeting today.

“Quad has made an important place for itself before the world in such a short period. Today, Quad’s scope has become extensive, its form effective. Our mutual trust and our determination are giving new energy and enthusiasm to democratic powers,” PM Modi stated.

The Quad was formed in the aftermath of the 2004 Indian Ocean Tsunami to coordinate humanitarian aid and disaster relief. Since then, it has evolved into a leading regional partnership dedicated to advancing a shared vision of a free and open Indo-Pacific through practical cooperation on a variety of 21st-century challenges.

Despite the tough circumstances of COVID-19, Prime Minister Modi stated that member nations have enhanced mutual coordination in areas such as vaccine delivery, climate action, supply chain resilience, disaster management, and economic cooperation.
Since their first virtual meeting in March 2021, in-person Summit in Washington, D.C. in September 2021, and virtual meeting in March 2022, the Quad Leaders have met four times.

The Quad Summit provides leaders with an opportunity to discuss developments in the Indo-Pacific region as well as current global topics of mutual relevance.