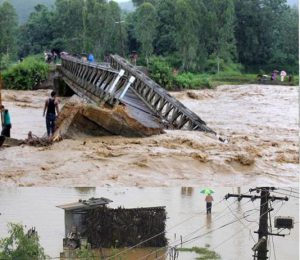 Six more people perished in floods in Assam on Sunday, bringing the total death toll to 24, officials said, even as the water situation improved marginally.

In 22 of the state’s 34 districts, about 7.19 lakh people have been affected. According to officials of the Assam State Disaster Management Authority (ASDMA), further deaths have been reported in the districts of Nagaon (4), Cachar, and Hojai.

In separate districts, 19 people died in floods and five people died in landslides. According to an ASDMA report, 7,19,425 people from 2,095 villages in 22 districts have been affected, including 1,41,050 children.

According to the report, disaster response troops and volunteers assisted in the evacuation of 24,749 stranded people. In total, 269 aid camps and 152 distribution centres have been established across the impacted districts. The aid camps are home to a total of 91,518 individuals. A total of 95,473 hectares of crops have been harmed.

On Sunday, 2,000 litres of diesel and 12 metric tonnes of food were flown from Jorhat to three distant locations in the Dima Hasao district: Laisong, Khepera, and Mazidisa, according to an ASDMA release.

With the help of NIC, an IoT-based water level monitoring system called “Jaltarangini” was tested in Dibrugarh, and its rollout will increase the precision of flood forecasts and early warning systems. 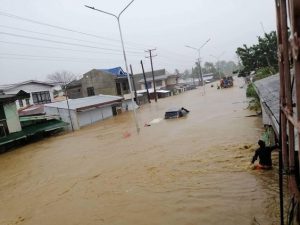 Intermittent rain continued to batter the hill section of the Northeast Frontier Railway (NFR) in Dima Hasao district on Sunday, hurting the Lumding-Badarpur single line railway route that connects Tripura, Mizoram, Manipur, and the southern part of Assam with the rest of the country.

Train services in the Lumding Division have been either cancelled or partially cancelled, and short terminated or short originated, according to NFR’s Chief Public Relations Officer, Sabyasachi De.