Firefighting at the Bhalswa garbage site in Delhi has been going on for the past 36 hours. 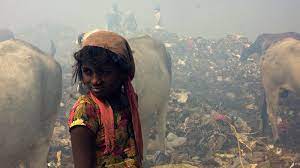 On Thursday, several portions of the Bhalswa waste site in Delhi were still burning. There are fire crews on the scene. More information is awaited. On Tuesday, a big fire broke out at the Bhalswa dump in North Delhi. According to Delhi Fire Service officials, smoke was reported around 5:00 pm that later spread into a massive fire.

Following the incident, locals living near the Bhalswa landfill in Delhi have also been reporting breathing problems.

Meanwhile, Gopal Rai, the Delhi Environment Minister, accused the Municipal Corporation of Delhi (MCD) of incompetence in the Bhalswa dump fire on Wednesday.

The minister told ANI that the Delhi government has requested a report on the fire occurrence from the Delhi Pollution Control Committee (DPCC).

“The people of Delhi are facing landfill fire due to MCD’s negligence and 15 years of BJP’s corruption. We ordered Delhi Pollution Control Committee (DPCC) on Tuesday to inquire and submit the report within 24 hours. We will decide on this matter after his report comes,” Rai said.

“If they had worked on this, these rubbish mountains would not have been here,” the minister stated, referring to the Bharatiya Janata Party (BJP).

He suggested that members of the BJP go visit the Bhalswa landfill and assess what they have done over the last 15 years. “These piles of debris would not have stood today if bulldozers had been used for 15 years.”